NORFOLK, NEBRASKA — MARCH 2015 — Herbicide-resistant weeds have finally met their match, thanks to a revolutionary new adjuvant, appropriately named NanoRevolution 2.0™, recently introduced by Max Systems LLC. Added to a tank mix of glyphosate at the conservative rate of four to eight ounces per acre (based on weed size), NanoRevolution 2.0 has proven effective in killing resistant weed species that had already had up to two applications of the leading glyphosate product.

“The key to the product’s effectiveness is its new nanotechnology,” says Chris Schlegel, co-owner and business partner in Max Systems LLC. “NanoRevolution 2.0 doesn’t alter the existing chemistry of glyphosate, or any other herbicide it is used with, including 2,4-D. Nor does it heat up the chemistry, which can ultimately result in crop damage. It simply increases the penetration and translocation of the chemistry to the point the plant can’t help but take it up.” 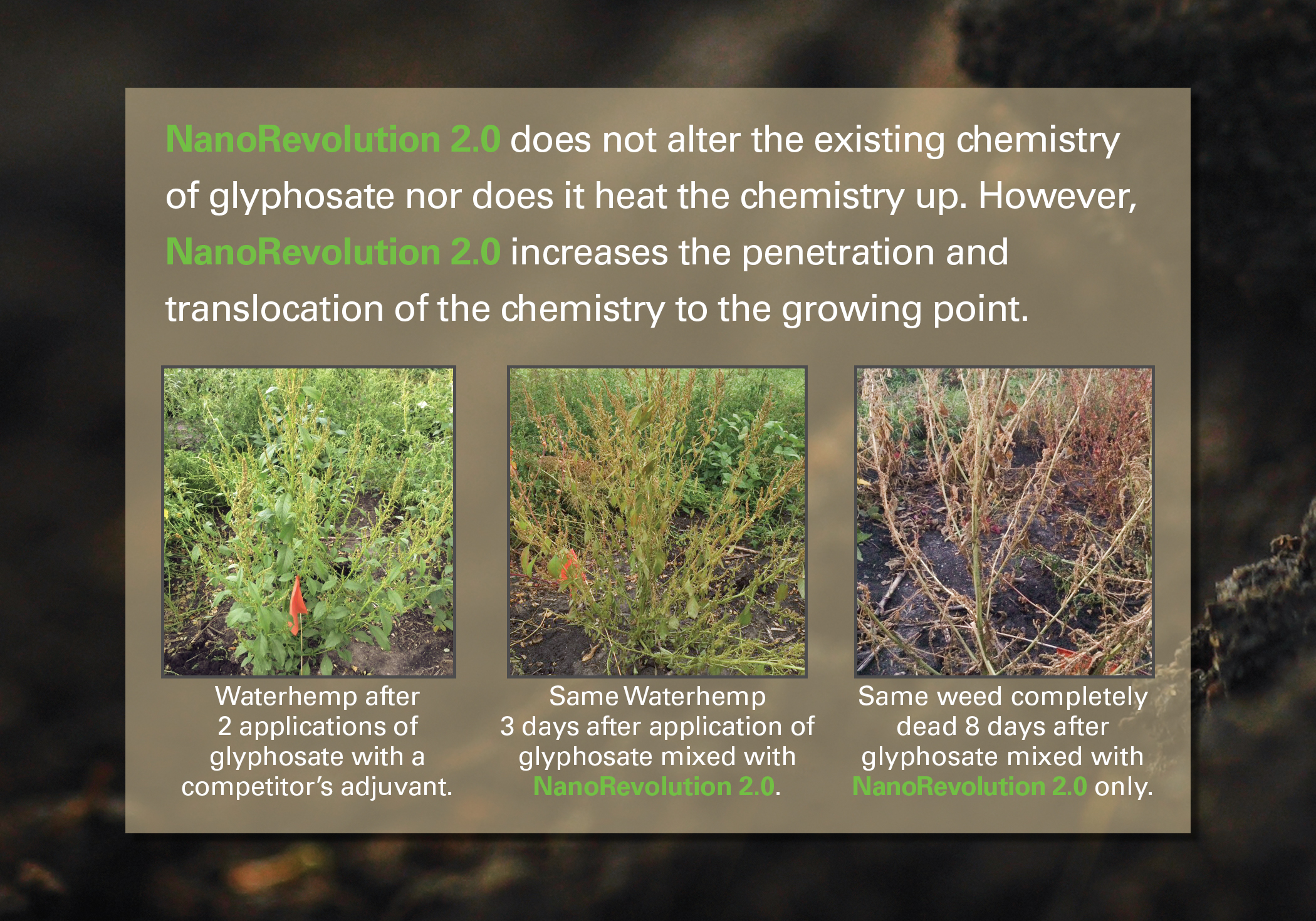 Although the product is technically classified as an adjuvant, its second-generation nano-driven performance actually makes it different than anything currently available. By definition, nanotechnology is the manipulation of matter on a molecular, or even atomic scale, since one nanometer is classified as one billionth of a meter in size. To put that into perspective, the comparative size of a nanometer to a meter is equivalent to that of a marble compared to the size of the earth. That means the nano-sized particles in NanoRevolution 2.0 can easily penetrate plant cells, taking the herbicide, which binds to them, along for a free ride.

“From our research, the weed persistence we’ve seen in recent years is more of a dosing issue than a resistance issue,” adds Doug Stengel, the other co-owner and business partner in the company. “Producers have had to increase rates, try other chemistry or make additional applications in an attempt to kill the plant. Yet, in all the university field and laboratory trials that have been conducted with NanoRevolution 2.0, we’ve never had a failure. Once the herbicide is fused with the micro-particles in a synergistic relationship, it’s able to translocate throughout the plant, all the way down to the growing point.”

In university trials, herbicides mixed with NanoRevolution 2.0 have proven to be 95+ percent effective in penetrating the plant, compared to up to 70 percent or less with crop oil and 50 percent or less with water only. In fact, in one University of Florida trial, glyphosate plus NanoRevolution 2.0 killed palmer amaranth and waterhemp that was beyond “off label” at four to six feet in height.

“Equally important, NanoRevolution 2.0 is extremely safe to the plants, the environment and the applicator,” Schlegel adds, noting that the product is already available through distributors in 22 states. “It’s made from 100 percent all-natural products; plus, it allows a producer to use the labeled amount of chemical, instead of having to increase the rate or use multiple applications. We see it as a ‘win/win’ for everything but the weeds.”

For more information on NanoRevolution 2.0 or other products from Max Systems LLC, visit http://www.maxsystemsag.com or call (320) 979-5121.